Thursday October 4, 2018 (RBB NEWS) – finitive work, “Black Hawk Down,” has become the name most associated with the deadly engagement.

It was Oct. 3, 1993, when more than 120 members of the elite Delta Force, Army Rangers and Air Force Pararescumen were tasked with capturing two senior advisers to Somali clan leader Mohammed Farrah Aidid, who had become a thorn in the side to the United Nations humanitarian mission in Somalia.

The mission went awry when two Black Hawk helicopters crashed after being brought down by rocket-propelled grenades. Trapped American troops soon faced withering fire from hundreds of Aidid’s fighters, who surrounded them on all sides, unable to break out until the morning of Oct. 4.

Eighteen Americans were killed and 73 others were wounded in the battle that has been described as the most intense combat American troops faced since the Vietnam War. The number of Somali fighters killed in the battle is estimated in the hundreds.

Master Sgt. Gary I. Gordon and Sgt. 1st Class Randall D. Shughart were both posthumously awarded the Medal of Honor for their heroism in rushing to aid the injured crew of one of the downed helicopters. One of the injured pilots, CW3 Michael Durant, was later captured by Somali fighters and held hostage for 11 days before he was released.

The Battle of Mogadishu has been seared into the American consciousness as “Black Hawk Down,” the title of Bowden’s 1999 book and the successful 2001 movie.

In 1993, Bowden was a reporter with the Philadelphia Inquirer who counted himself among the many Americans surprised to learn that there was still a U.S. military presence in Somalia after the end of the humanitarian mission just months before.

“I think the press had really stopped covering what was going on in Somalia after the bulk of American forces were withdrawn in the spring of 1993,” Bowden said in an interview with ABC News.

In December 1992, President George H.W. Bush had sent several thousand U.S. Marines to Somalia to help ease a food crisis. Months later, they were brought home by President Bill Clinton after that situation had eased, but an elite military force known as Task Force Ranger remained behind to target Aidid. 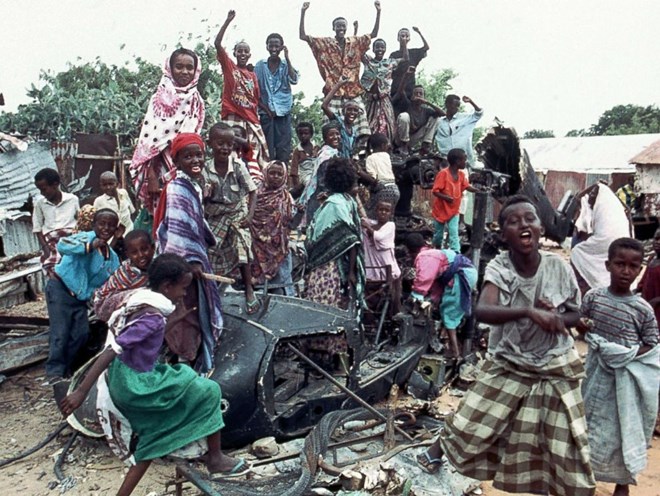 Because they were part of a covert mission, the six previous raids carried out in the summer of 1993 received no press coverage.

“There had been to my memory no coverage, or anything, so there was really nothing to prepare Congress or the American people for that intense combat and for those terrible consequences,” Bowden said.

Like many other Americans, he was shocked to see the television images of slain U.S. service members being dragged through the streets of Mogadishu by Aidid’s fighters.

He said he felt, as a reporter, he was in a good position to find out the backstory of Task Force Ranger and what happened in the battle that raged on Oct. 3-4.

He spent years researching, interviewing survivors and using the surprising amount of audio and video recordings of the actual battle.

“I just detailed, literally, the actual radio dialogue between various forces on the ground,” Bowden said. “I could watch the Black Hawk get hit and spiral down to the ground.”

He was also struck by the sophisticated training, skills and professionalism of the roughly 100 American service members as they fought off what he described as thousands of experienced Somali fighters.

But there was a moment that captured for Bowden the spirit and camaraderie of the American troops trapped in the intense battle.

Shot in the femoral artery with what would prove to be a fatal wound, Cpl. Jamie Smith’s fellow Rangers took turns “literally inserting their fingers into his wound to staunch the bleeding.”

“It’s just a level of loyalty and commitment and courage that I think is remarkable and strikes anyone who learns the story,” Bowden said.

Seventeen years of war in Afghanistan and Iraq have made the American public accustomed to seeing soldiers in action, but Bowden believes Americans in 1993 were surprised by what they learned.

“The Battle of Mogadishu unveiled a kind of fighting, the kind of tactics and equipment, that we hadn’t seen and that we’ve now become very familiar with” Bowden said. That included the use of highly trained troops using helicopters in close urban combat, concepts and training that Bowden said were “new and unexpected.”

While the U.S. continues to teach combat tactics learned from the Battle of Mogadishu, Bowden said he hopes the military has taken away another valuable lesson.

“When we deploy troops overseas there has to be a level of candor with the American people so that people understand the risks of doing so,” Bowden said. “And so, as a result, they won’t be horrified and surprised when things don’t work perfectly.”

Bowden said he’s been “tremendously surprised and gratified” at how iconic the title “Black Hawk Down” has become, but it almost never came about.

Bowden had long-planned to entitle his book “61 Down,” a reference to the call sign of the first helicopter shot down in the battle. He had heard the phrase in one of the recordings of the radio transmissions during the battle.

He recalls taking a drive one day through Chester County, Pennsylvania, wondering if there might be a better title. He then remembered that further along that same audio recording another voice had radioed “we have got a Black Hawk down in the city.”

“And that just struck me as a more musical phrase, and I liked it a lot better, so I used it,” he said. “I never imagined that this book would have the audience that it ultimately had or it would shape people’s understanding of that episode as completely as it has.

“I think ‘Black Hawk Down’ is an illustration of how the best-placed plans, carried out by the best-trained professional men, can still go awry — and when they do in a combat situation, the consequences are terrible.”