(JTA) — An anti-Semitic voicemail may lead to a truce between two feuding members of Congress.

So the two lawmakers have been sparring on Twitter. Omar, one of the first two Muslim women elected to the Congress, has called Zeldin Islamaphobic. Zeldin, one of only two Jewish Republicans in the U.S. House of Representatives, called Omar anti-Semitic.

But they agreed to meet for tea after Zeldin shared an anti-Semitic rant left on his office voicemail. The message praised virulent anti-Semite Louis Farrakhan. It also called Jews “worse than Hitler,” “maggots” and “bloodsuckers.”

Zeldin asked Omar whether she disagreed with the entire message, which included criticism of Israel. Omar called it “heinous and hateful.”

“Maybe we could meet and share notes on how to fight religious discrimination of all kinds?” she tweeted back. “Maybe over Somali tea, in your old office, which I happen to be in now.”

Omar also retweeted a tweet from IfNotNow, the left-wing millennial Jewish group, wishing her “shkoyach” for her response. The word is a shortening of “yasher koach,” the traditional Jewish expression of congratulations.

Just past midnight on Friday morning, Zeldin accepted the invitation — but also called on Omar to endorse a resolution “rejecting anti-Israel and anti-Semitic hatred.” Then, later, he appeared to backtrack.

That afternoon, he tweeted, “I’ll meet [with] any colleague, GOP/Dem[ocrat] to discuss anything, but [without] apology I’ll NEVER stand by while Members advocate pro-BDS, anti-Israel hate…” He also criticized Omar’s positions on fighting ISIS, the Venezuela crisis and the U.S. income tax. 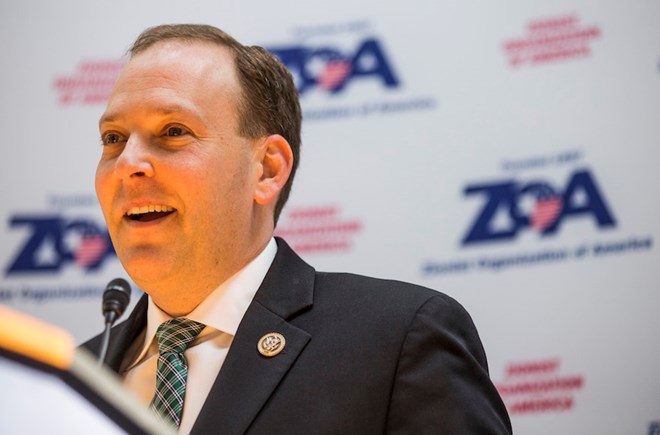 Rep. Lee Zeldin speaks at an event hosted by the Zionist Organization of America on Capitol Hill in Washington, May 9, 2018. (Zach Gibson/Getty Images)

The feud started Tuesday when Zeldin sounded alarmed that Omar was tapped for a seat on the House Foreign Affairs Committee by the new speaker, Rep. Nancy Pelosi.

“Crazy to watch what House Dems are empowering/elevating,” he tweeted.

“Don’t mind him, he is just waking up to the reality of having Muslim women as colleagues who know how to stand up to bullies!” she wrote.

He countered with a tweet saying “Your anti-Semitic & anti-Israel hate is strong & wrong.”

Her response: “Thank you, next.”

Both Zeldin and Omar have been criticized for how they’ve related to Muslims and Jews, respectively. Zeldin faced protest for defending President Donald Trump’s travel ban on citizens of several mostly-Muslim countries.

And Omar has been criticized for a 2012 tweet in which she said “Israel has hypnotized the world.” In January, she apologized for unwittingly using an anti-Semitic trope.