Somali presidential elections are scheduled in just a few months, war is erupting in neighboring Ethiopia, and Shebab militants are still strong. The timing, Somalis say, could not be worse.

NAIROBI, Kenya — Somalis fear a U.S. decision to withdraw troops from their country will be seen as a victory for the Qaeda-linked militants who have wreaked havoc there for years, and sow the potential for further chaos at an especially delicate moment for Somalia and the region.

Somali presidential elections are scheduled in just two months, war is erupting in neighboring Ethiopia, and the militants, from the Shabab, are still strong despite years of American-led raids and drone strikes.

The timing of Friday’s Pentagon announcement, some Somalis say, is terrible.

“The fight against global terrorism is still ongoing and we must still win the battle for peace and security to prevail,” said Ayub Ismail Yusuf, a Somali senator, who called the U.S. decision “untimely” on Twitter. “We must not give up on our successes.”

At Mogadishu University, Abdullahi, a 23-year-old political science student, said he feared the Shabab will now be able to “strike without fear” in the capital.

“Now, their leaders can move easily from place to place with little threat,” he added, asking that his full name be withheld to protect against possible reprisals. He lives near the charred remains of an ice-cream parlor blitzed by a Shabab suicide bomber on Nov. 27, an attack that killed seven people.

The Pentagon says it will “reposition” some of the estimated 700 American troops in Somalia to other parts of East Africa — likely Kenya and Djibouti — and continue to carry out raids against the Shabab and a smaller cluster of Islamic State fighters in northern Somalia from bases in neighboring countries.

Drone strikes, which have killed numerous senior and midlevel Shabab commanders as well as dozens of civilians, will continue.

President Mohamed Abdullahi Mohamed of Somalia did not immediately react to the U.S. decision, announced late Friday as part of President Trump’s drive to end what he calls America’s endless wars before leaving office on Jan. 20. Whether fears over the withdrawal, which is expected by mid-January, are fully merited is not yet clear.

What seems certain, though, is that the brunt of the changes will be borne by Danab, an elite Somali force that the American military took under its wing after its formation in 2013. Since then, American soldiers have trained and armed the Somali commandos, whose numbers have grown to about 1,000, and have often accompanied them on raids against the Shabab.

Now, Danab will be largely on its own.

Col. Ahmed Abdullahi Sheikh, who commanded Danab between 2016 and 2019, said he expected the United States to continue funding and arming the elite force. But the crucial U.S. “advise-and-assist” role — Americans helping Somali officers plan raids, and accompanying them into firefights — will not be easily replaced, he said.

“You can launch and stage operations from countries like Djibouti and Kenya, but it’s not the same as being in the country,” Colonel Sheikh said. “You can’t train a force remotely.”

Even with years of U.S. support, Somalia has been able to only partially blunt the Shabab’s potency.

The group controls swaths of southern Somalia, where its fighters ambush and bomb Somalia soldiers and African Union peacekeepers. A recent U.S. government report noted that the Shabab was involved in 440 violent events in Somalia between July and September — the highest number in two years.

American and Somali pressure has succeeded, though, in stemming sophisticated, large-scale attacks in Mogadishu, said Omar Mahmood, a Somalia analyst at the International Crisis Group, a conflict research organization. 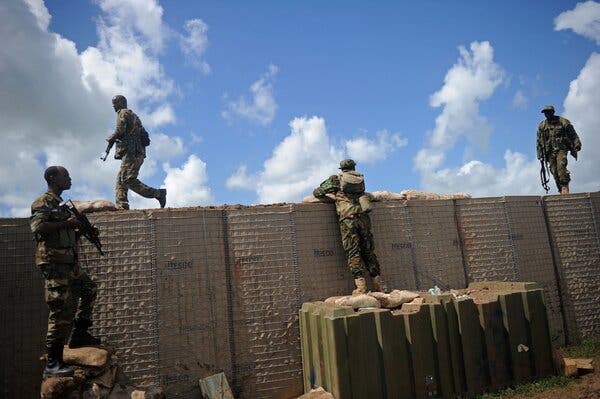 Somali soldiers at a military base where an American special operations soldier was killed by a 2018 mortar attack.Credit…Mohamed Abdiwahab/Agence France-Presse — Getty Images

The Somalis were supposed to be standing on their own feet in the coming year. An international plan hashed out in 2017 called for Somali security forces to be operating independently by 2021. That will not happen.

Danab, the main counterterrorism strike force, still relies heavily on American support and has reached only about one-third of its planned size.

The American withdrawal “could have a pretty big impact” Mr. Mahmood said. “The American advisory role is invaluable for Danab. This raises concerns it can continue to develop.”

Danab is not the main pillar of Somali security. The government relies heavily on a 19,000-strong force of African Union peacekeepers — although that, too, has been buffeted by uncertainty because of the erupting civil conflict in Ethiopia, which contributes about 4,000 troops.

The American pullout from Somalia may have been inevitable. President-elect Joseph R. Biden Jr. has also committed to withdrawing American troops from “forever wars” — open-ended counterterrorism missions that proliferated after 2001.

But Somalia experts warned that Mr. Trump’s decision to pull the plug now, as Somalia faces parliamentary elections this month and a presidential vote in February, was a recipe for chaos and maximum damage.

“It’s typical of the Trump administration’s incoherent policy toward Somalia,” said Matt Bryden, a strategic adviser at Sahan Research, a group that specializes in the Horn of Africa. “This is an incomprehensible decision at a time when governments are likely to change in both Somalia and the U.S. It would have made more sense to wait a few months.”

Pentagon assurances that the U.S. will continue to hit the Shabab from bases outside the country, he said, “look like a brave attempt to put lipstick on a pig.”

Other experts, though, said there is never a good time to leave a fragile country like Somalia.

“It’s probably a good thing if the American relationship with Somalia is not predominantly about a few hundred soldiers,” said Brittany Brown, a former Africa adviser at the National Security Council in the Obama and Trump administrations and now chief of staff for the International Crisis Group. “But like everything with Trump, it’s been so poorly executed.

Somalia’s turmoil will not be solved by drone strikes or military raids, she said. “It won’t stop until Somalia has a government that can provide services to its people. Until then, Al Shabab will continue to be a threat.”

The presidential election itself faces some uncertainty. The incumbent, Mr. Mohamed, has been at loggerheads with Somalia’s regional leaders, and the opposition fears he may try to manipulate the vote.

Without the U.S. troops, the Somalis can still rely on other foreign allies like Qatar, which provides cash and humanitarian aid, and Turkey, which aims to train about 10,000 regular soldiers.

But for the Danab force, the American withdrawal will constitute a “wake-up call,” said Colonel Sheikh, its former commander. “They realize they can’t rely on outside help any more.”

It may also leave the force more prone to political interference, not to mention the corruption that has blighted other Somali security units. And the U.S. departure may deal a blow to morale, raising questions about America’s commitment to their fight.

“A bit of trust will be lost,” Colonel Sheikh said. “And it will be really hard to get it back.”