The flight was bound for Turkey, with a connection to Somalia. 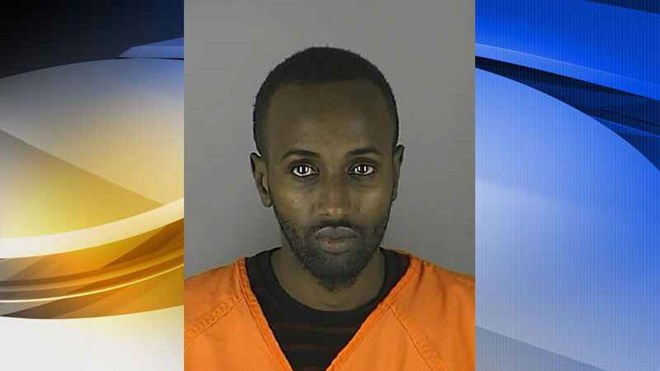 ‘Turkey is the gateway to Somalia and the Middle East,’ said former Hennepin County Sheriff Rich Stanek. ‘There is not extradition from Somalia, so once he’s there, doesn’t matter what they do here in the U.S. in terms of criminal charges.’

The agents also found an arrest warrant on file from the Hennepin County Sheriff’s Office.

It turns out Maye, 34, was wanted in connection with an Aug. 24 hit and run crash that fatally injured 31-year old Idris Yussuf, now survived by his wife Muna Saifleh and their 2-year old daughter Sarah.
‘We deserve answers,’ Saifleh told 5 Eyewitness News just days after the crash. ‘My husband was an amazing guy. His first priority was his daughter. He used to call her my princess, he loved her so much.’

A CBP release says after the agents confirmed the warrant was active, they confronted Maye at a departure gate, where he confirmed his identity.

Officers then arrested Maye and turned him over to the Metropolitan Washington Airports Authority Police.

Minneapolis police say around 2:25 a.m. on Aug. 24, they responded to a report of a motor vehicle crash along the 600 block of Franklin Avenue.

‘A suspect car drove over lanes of travel, pinned him against his car,’ said Minneapolis Police Spokesperson John Elder. ‘When he took off, he ended up sending him through the air, falling into the roadway.’

Authorities now believe Yussuf and Maye got into a fight in a bar nearby.

Afterward, they say, Yussuf was walking toward the rented Hyundai he used as an Uber, when Maye struck him with his car.

‘He used his vehicle as a weapon by which to settle this argument,’ Elder says.

According to an autopsy report, Yussuf died the next night from severe head injuries.

A family friend who wants to remain anonymous says he’s surprised by what happened.

‘He never bothered with anybody,’ the friend says. ‘He always minded his own business. He would never get into that situation.’

At one point, Maye had a higher public profile, running unsuccessfully for a Minneapolis Park and Recreation Board seat in 2013.

But after the crash, police say Maye fled from Minnesota.

‘The suspect attempted to flee the state,’ Elder explains. ‘He did flee the state. We were aware of this, and made immediate contact with the border patrol.’

Elder added Minneapolis investigators informed customs officials on ‘all four sides of the US.’

Four days after the crash, Maye’s name popped up in a national law enforcement database, called the National Crime Information Center, or NCIC for short.

Stanek says it’s rare for a suspect to travel outside Minnesota to attempt a getaway to another country.

He adds that cooperation between police agencies — and timing — were critical factors in capturing Maye.

Maye is now in custody in the Loudoun County Jail in Leesburg, Virginia. He has not been formally charged.

Local authorities now have a warrant to extradite him back to Minnesota, but police aren’t revealing how long that process will take.

Elder says information from the public played a major role in the investigation.

‘This was a case where people cared enough to stand up and provide information. Because of that, we have an individual who’s in custody,’ he explained. ‘Community and family, and people that were in the area. This is how we’re able to solve crimes.’

Saifleh politely declined to comment on the arrest, except to say, ‘I’m very thankful he’s been captured.’