Watch a large variety of Dutch movies at the Netherlands Film Festival in Utrecht. From very famous to truly obscure and from features and documentaries to short films and TV productions: over 150,000 people watch more than 400 long and short films in fifteen venues. 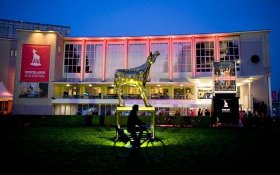 Film scientists, students, producers, directors and makers, programmers, historians and of course the general public visits the Netherlands Film Festival. Besides hundreds of movies, the festival also organizes talk-shows, seminars and discussions. The highlight is the Award Night when the ‘Gouden Kalveren’, the grand prizes of the Dutch Film, are presented.

Anyone who’s into movies should be at the Netherlands Film Festival in Utrecht. It is the most important get-together within the Dutch film industry. The festival is held in the center of Utrecht and is easily combined with many neighboring cultural highlights.

Spending the night in Utrecht

Are you searching for a hip design hotel, a romantic bed & breakfast, or a pleasant holiday home for your family? Utrecht has suitable accommodations for every taste and budget. Check out the comprehensive selection and book your perfect holiday here!