InfoMigrants
Monday August 13, 2018 “The United Kingdom is home to the largest Somali community in Europe, many of whom arrived in the 1990s or before. But the struggle for integration is ever present despite nearly 75 percent of the community possessing British citizenship. Emma Wallis looks into the reasons why.

Yasmin Olaad looks straight at the camera and speaks confidently. She is wearing a pretty pink patterned headscarf and a bright pink lacy long-sleeved dress. She is part of an exhibition at Bristols’ M Shed museum showcasing the stories of young Somalis in the city of Bristol, home to the fastest growing Somali community in the UK.

Today, Yasmin Olaad works for the UN and travels the world. She counts herself as fortunate and can attest to lots of positive experiences. Nevertheless, occasionally she has to contend with prejudice.

She recounts the time she was telling an acquaintance she was about to embark on a PhD. He looked at her and said, “you know you need a degree and a masters degree for that!” Perhaps accompanied by a withering stare, she shot back: “I have a first class degree and a first class masters, so why are you assuming that I don’t?” She goes on, “they expect you to be really poor and uneducated, but overall my experience has been 80-90 percent positive.” Olaad thinks this is because Somalis are really adaptable and there is a lot of positivity in Somali culture.

But despite the positivity, the wider community has sometimes struggled with certain aspects of integration in the UK. And that struggle has been further complicated by the fact that most Somalis are Muslim.

Muna Abdi sits in a full Niqab. She too is part of the Bristol exhibition that was on show until April 2018 and that will be digitized to go online soon. Abdi’s hands rest calmly in her lap and then via an audio link you hear her speak. Clear Bristolian vowels roll warmly from her lips, perhaps not what many viewing the exhibition would have expected from her strict Muslim dress, and that’s the point.

“I’ve lived in Bristol 23 years,” she confides. “What don’t I love about Bristol?” she rhetorically asks, going on to respond: “the lush accent, the lovely attitudes of the people, the beautiful city; the fact that there is so much variety; […] everyone is just from everywhere in Bristol. It is so diverse and beautiful. I absolutely love Bristol.”

Breaking down those barriers and challenging people’s expectations is what the exhibition at Bristol’s M Shed museum was all about. The M Shed Museum wanted to get communities talking by displaying the stories of Bristol’s fastest growing Black and Minority Ethnic (BME) community, the Somalis.

Until recently, those Somalis tended to come to society’s attention, if at all, because of negative news stories focusing on Female Genital Mutilation (FGM), Crime, Drugs, poverty and the oppression of women. In short, if they were seen at all, they were not fully functioning members of society and were oppressed or poor. 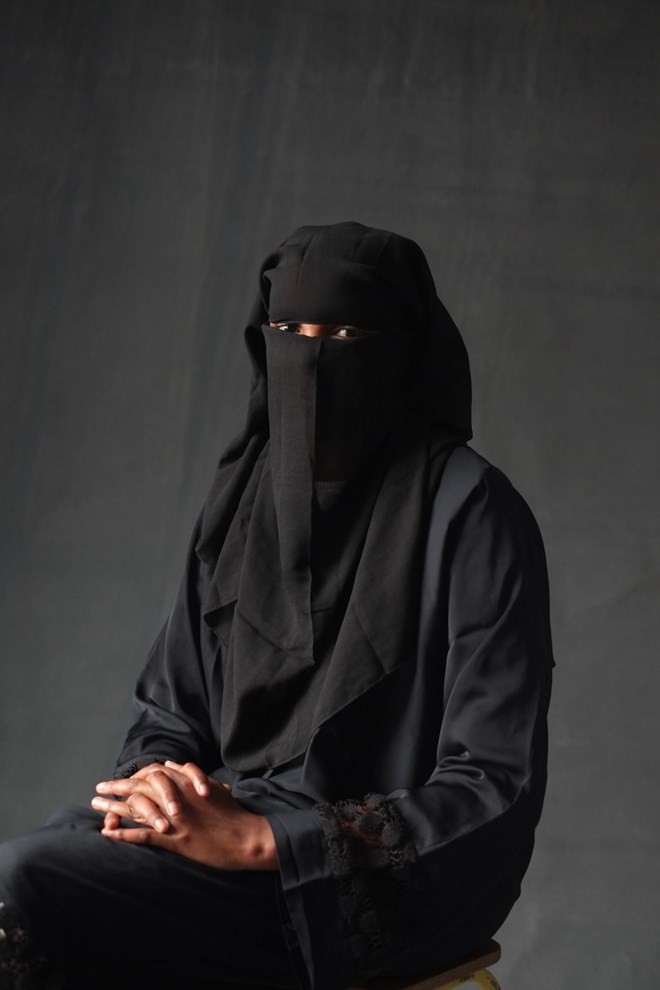 The Somali diaspora is one of the largest refugee populations in the world, with almost one million Somali refugees globally according to the UNHCR, the UN Refugee Agency. As of 30 June 2018, 2.6 million Somali people were displaced internally (IDP) and almost 1 million were forced to leave the country.

In the last three and a half years, internal displacement trends have increased 125 percent, according to the UNHCR’s fact sheet released in June 2018. Drought, conflict and continuing insecurity are the main reasons for Somalis to leave their homes, even today. Since the 1990s, war and unrest wrought havoc on the country and caused Somalis to look for new homes.

Challenges in the UK

In the UK, most of the Somali communities have been established since the 1990s and some decades, even centuries before. Despite not being recent arrivals, educational attainment has not always been as high as in some other migrant communities – despite Olaad’s example. This is also true for those born in the UK.

Unemployment and poverty are also factors which continue to dog many in the Somali British community. In the last three years, three Islamist influenced attacks in the UK and Belgium were perpetrated by young men with Somali origins which shone a negative spotlight on the community.

According to official figures, there are about 5,000 Somalis living in Bristol, but unofficial estimates think it could be double that.

Despite the numbers, Somalis weren’t particularly visible, or vocal, as a group, until recently.

The struggle for acceptance is common for the Somali community in Bristol and across the UK. The two-way integration that Bristol authorities are aiming for can occasionally be misunderstood, explains Abdi Mohammed, a director of the Somali Media Group, who also took part in the exhibition.

“Integration: What does that mean to us? Is it in terms of culture? Is it in terms of assimilation which is sometimes very difficult? For me it is, [asking the question]: are we contributing?” He thinks there is a huge amount of contribution from the Somali community, both socially and economically and that, he concludes, is how integration should be measured.

The use of labels

In the UK, Somalis are often not seen as a group apart but as part of the wider Black and Minority Ethnic (BME) community. That is ignoring the complexity of identities within the Somali community itself, thinks Sado Jirde. She’s director of the Black South West Network in Bristol which works for race equality. Sado is an ethnic Somali who grew up in Kenya and then the UK.

“I guess naturally, when we tend to look at the BME community we see them as a homogeneous group, but that is not the case. They might be black but even in the context of Africa, culturally [each country is] very different, and religiously they are very different [too.] The Somalis, even within themselves have fundamental issues, they have clans, they have other things, so I wouldn’t even call the Somalis one thing.”

Most Somalis in the UK are Muslim. That wasn’t always the case, Finn White, the curator of the exhibition, explains. They showed the group who were part of the exhibition photos that the museum held of Somalians and Somalilanders from the past.

Many of the younger generation were surprised to see that their forefathers and mothers did not always wear the Hijab and were a lot less covered up than the dress they consider “traditionally Somali” today. Today’s adherence to Islamic dress codes can also present difficulties to integration for the host society because of the negative connotations that have become associated with Muslims since 2001 and the so-called ‘war on terror.’

And it’s not just angry young men who are shouting about their faith. Sado explains she took up wearing the Hijab following the Brexit referendum in 2016.

“A lot of people didn’t even know I was a Muslim. But after the [Brexit] conversation, then Trump came in and I thought I need to be counted and I want to be a Muslim visibly.” Three days after the Brexit vote, she suffered what she calls a ‘racist type attack’ walking through the center of town. “I was actually walking […] and I felt somebody hit me with a potato on the head. I’ve never felt anything [like that] before.”

The majority of the Somali community live in the eastern part of Bristol, around Easton and Lawrence Hill. Like many in this area, their integration is often compounded by the problems of poverty. Drug crime is an ongoing problem.

A few years ago, a Somali drug gang was convicted of grooming and gang-raping under-age girls, which further tarnished the community’s reputation. Despite that, Mohammed Ali, a youth worker based in Easton community center, says that it is the younger generation who are the keys to integration.

Just around the corner from the community center are a couple of streets lined with Somali businesses. Money exchange facilities, internet points and convenience stores sit next to taxi companies and restaurants. Many other members of minority ethnic communities also use these facilities. 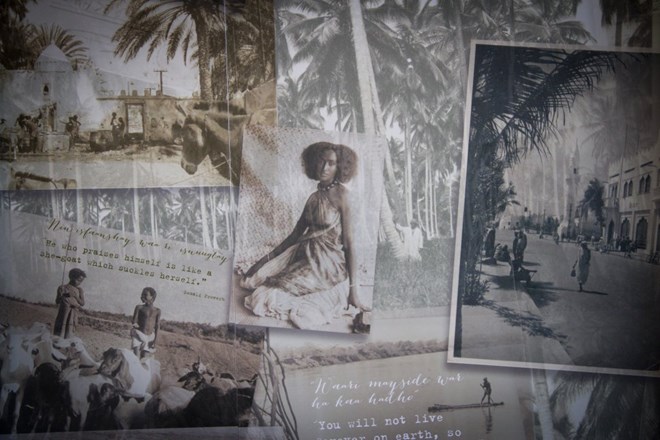 The director of the Somali media group, Abdi Mohammed, has his office in the east of Bristol too. He thinks contributing economically and socially is the key to integration and avoids assimilation.

The exhibition “provided that opportunity to listen to stories and […] to actually talk to some real people,” explains Finn White. Seeing themselves and their stories celebrated on the wall has galvanized the Somali community too.

White remembers Somali teenagers, who weren’t in the exhibition, lining up to take selfies in front of it and young Somali school children rushing up to the exhibition to touch and gaze in awe at seeing people like them reflected back at them from the walls of an institution.

Sado Jirde, who came up with the proposal for the exhibition, would agree. She thinks publicizing ‘normal’ people’s stories for everyone to read has helped break down barriers. It has given her hope for the future. Though challenges exist, removing labels and getting to know each other is the only way to move forward and build a positive future for integration, Jirde says.