A CIA officer died during a raid in Somalia last month targeting a key extremist thought to be responsible for an attack that killed an American soldier in Kenya last year, local intelligence officials have told the Guardian.

The officer was deployed alongside Somali and US special forces during the operation at Gendershe, a coastal village about 30 miles south-west of Mogadishu, and died when fighters from the al-Shabaab extremist movement detonated a car bomb minutes after the raid began on 6 November, the official said.

A Somali intelligence officer who works with the US-trained Somali “Danab” special forces unit in Lower Shabelle said: “Our officers were supported by the US officers. We flew at 2am that night. The soldiers disembarked from the chopper and went on foot in the bush before a huge explosion went off and killed the American friend and four of our [Somali] officers.”

Somali officials said the operation was launched following information that three senior al-Shabaab commanders would be in Gendershe that night. Among them was Abdullahi Osman Mohamed, an expert bomb-maker believed to be responsible for many of the powerful devices that have killed hundreds of civilians in Somalia in recent years.

Mohamed, who is also known as “Engineer Ismail”, was recently listed by the US government as a “specially designated global terrorist”, a step that freezes any assets he may have in US jurisdictions and bans Americans from doing any business with him.

The listing says the 36-year-old is the group’s senior explosives expert, head of al-Shabaab’s media wing and a key adviser of Ahmed Diriye, the leader or “emir” of the movement.

Mohamed is also thought to have to have masterminded a series of attacks in the last year, including an assault in January on a military base in Kenya that killed an American soldier and two US contractors.

But the Gendershe raid was a failure. After a 40-minute firefight, the US and Somali forces withdrew. “The operation was not successful. We did not get them,” a second Somali officer said.

Al-Shabaab sources confirmed the clash, and claimed they had ambushed the US and Somali forces after learning of the operation in advance. “American soldiers accompanied by Somali forces raided an al-Shabaab base in Gendershe. We had received intelligence that they were coming. We were ready and a fierce gun battle broke out. A number of officers were killed including the CIA officer,” Abu Mohamed, an al-Shabaab commander in Lower Shabelle, told the Guardian. .

The identity of the CIA officer is not known, but the New York Times reported that he was a member of the CIA’s paramilitary division, the Special Activities Center, and a former Navy Seal. CIA officers sometimes accompany military units during counter-terrorism raids to help identify targets or gather intelligence.

The CIA declined to comment when contacted by the Guardian.

The US has sustained relatively few casualties in ongoing military operations targeting Islamist extremists in recent years but in one bloody incident in 2017, four US soldiers died when they were ambushed in Niger.

Those deaths – the worst encounter for US troops in Africa for more than 20 years – prompted a fierce debate over US military involvement on the continent, and the international threat posed by extremists there. There are more than 5,000 military personnel under the US Africa military command on the continent, with most based in a single major base in Djibouti on the Red Sea.

Between 650 and 800 troops are operating in Somalia, according to the most recent figures. The Pentagon is thought likely to withdraw all or most US forces currently involved in training and counter-terrorism missions in the country by January in line with presidential directives to bring home troops in the Middle East and Afghanistan.

Local officials and experts say such a move would deal a devastating blow to local counter-terrorism efforts, especially to such units as Somalia’s Danab special forces that rely very heavily on US logistics support, intelligence and training. 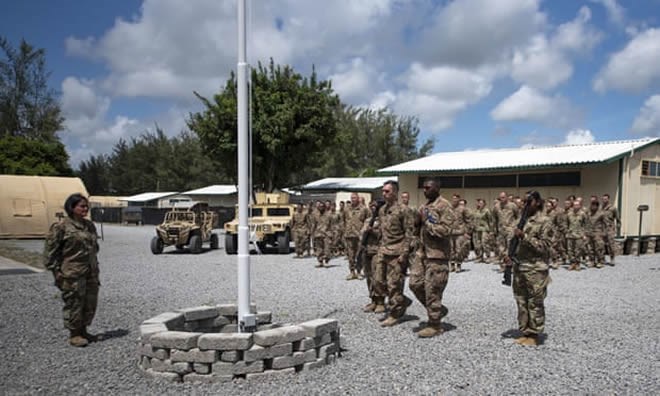 US service personnel at Camp Simba in Kenya in 2019. The base was attacked by al-Shabaab in January this year, killing a US soldier and two American contractors. Photograph: Staff Sgt. Lexie West/AP

The US, regional allies and the Somalis have struggled to find an effective strategy to counter al-Shabaab, a tenacious and ruthless organisation that emerged almost 15 years ago. An intensified campaign of drone strikes has killed senior commanders and disrupted the group’s activities but not made a major strategic impact, analysts say.

Maalim Ayman, the leader of an al-Shabaab unit conducting attacks and operations in Kenya and Somalia, was also listed as a global terrorist by the US state department last month.

In the most recent bomb attack by al-Shabaab, at least seven people were killed and many more injured in an ice-cream parlour in Mogadishu on Saturday. Two weeks ago, five died in another suicide attack on a restaurant near a police academy in the city.

Years of US efforts to fight extremism in Africa and bolster local countries’ capabilities have brought mixed results. A recent official report by US government inspectors on counter-terrorism efforts in much of Africa said that north African organisations such as al-Qaeda in the Islamic Maghreb (AQIM) and Isis-Libya were “significantly degraded” but in west Africa, Islamist extremists continued to expand.

Over the weekend, three major bases of the United Nations peacekeeping force and French troops were simultaneously attacked with rockets in Mali, while more than 110 people were killed in a massacre in north-eastern Nigeria blamed on the Boko Haram group.