Saturday May 4, 2019 (RBB NEWS) – The new mosque is on the Asian side of Istanbul and took nearly six years to complete [Anadolu] “Camlica Mosque, which has a combination of Ottoman and Seljuk architectural style, can accommodate 63,000 worshippers.

Construction on the Camlica Mosque Complex began in 2013 and has a capacity of 63,000 worshippers. The previous Turkish record holder in capacity was a mosque in the southern province of Adana. Sabanci Central Mosque, which opened in 1998, can host 28,500 worshippers

The Camlica mosque, which has a combination of Ottoman and Seljuk architectural style, is on the Asian side of the city. 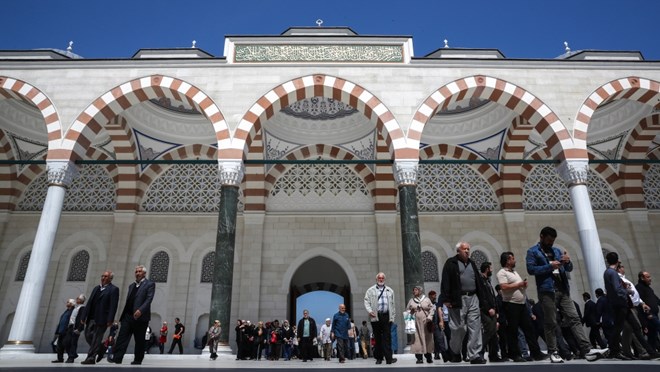 It took more than five years to complete work on the mosque [Anadolu]“Attacks in the name of religion on places of worship or innocent civilians constitute terrorism, not jihad,” The Daily Sabah reported Erdogan as saying.

“Those who attack mosques or those who target churches share the same dark mentality, they’re all common enemies of humanity,” Erdogan added.

The mosque sports six minarets representing six key aspects of Islamic belief including, the belief in one God, the prophets, angels, revealed books, the day of judgment and divine decree.

Aside from the mosque, the premises contain a museum of Turkish Islamic art as well as a library, gallery, conference hall and several workshops.