BY ALLISON BAKER
Monday July 16, 2018  “Growing up, Riya Jama loved the Harry Potter books. But as she worked her way through the series, she started wondering why there were no Somali witches or wizards in a world where it seemed like anything was possible. Jama turned to her father, who asked her a question that changed the course of her creative life: “Why would a woman who doesn’t look like you represent you?”

Now thirty-three, the Toronto-based writer, photographer and mixed-media artist has been representing people like herself in her work for over a decade. She identifies as a diasporic visual storyteller, aiming her lens at East Africa. Jama never really knew how to describe her art until she was invited to an Afrofuturism conference in New York. Credited as the artistic philosophy that shaped Marvel’s Black Panther, Afrofuturism reclaims black identity through different aspects of creativity.

Jama’s first solo show, Riyadii Farxiyo (which translates to “dreams of Farhiya” in Somali) is a culmination of mixed-media pieces based on her recurring dreams. It incorporates found photos of Somali girls—some morphed into cyborgs—superimposed on images of space. Each piece is named after a Somali woman in Jama’s life, with one exception. To pay homage to her father’s influence, Jama named one of her pieces Bilan—her father’s favourite female name. “I wanted this exhibit to be a love letter to little black girls who don’t ever feel seen,” she says.

Riyadii Farxiyo runs until Sept. 1 at Gallery 44. Here, Jama discusses some of her favourite pieces: 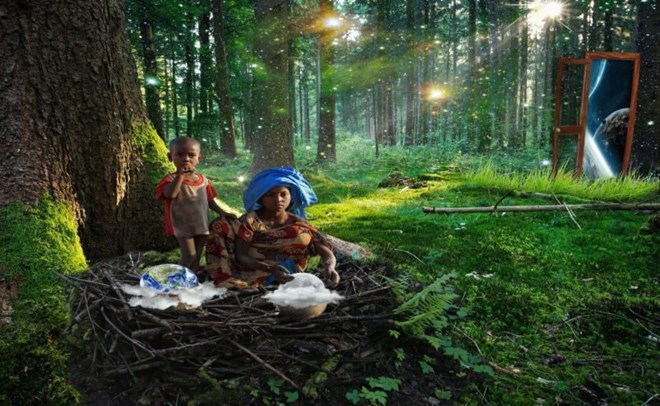 Named after Jama’s mother and biggest cheerleader, this image is based on a recurring dream Jama had of a young girl being watched over by her guardian. She says she identifies most with this piece and it was the first in the series to be finished.“It’s hard for my mental demons to win when my cheerleaders are stronger,” she says. 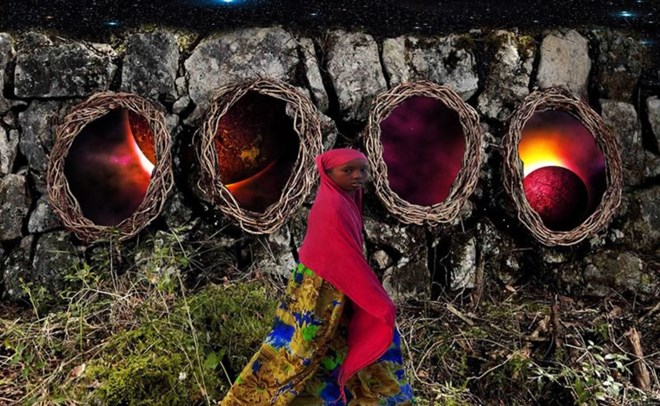 This one is named after Jama’s paternal grandmother. Jama says she initially wanted to make the girl’s hijab (this style is known as jilbab) blue, like the Somali flag, but she went with pink because it’s her grandmother’s favourite colour. The hijab is a frequent feature in Jama’s work—in Riyadii Farxiyo, she tried to focus entirely on visible Muslimahs (Muslim women). “If I, a non-hijabi Muslimah, didn’t feel seen, I can’t image how a hijabi feels.” 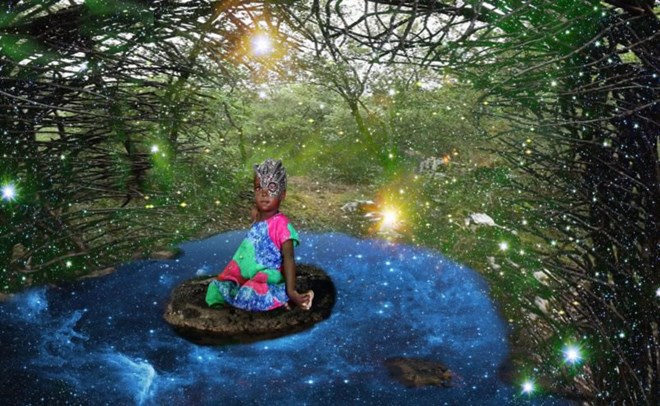 While Jama says her art is for everyone, she wants her work to be particularly accessible to young black girls (and children in general). “They need to see it more than adults,” she says. “I didn’t have this, and I didn’t know that it could exist.” 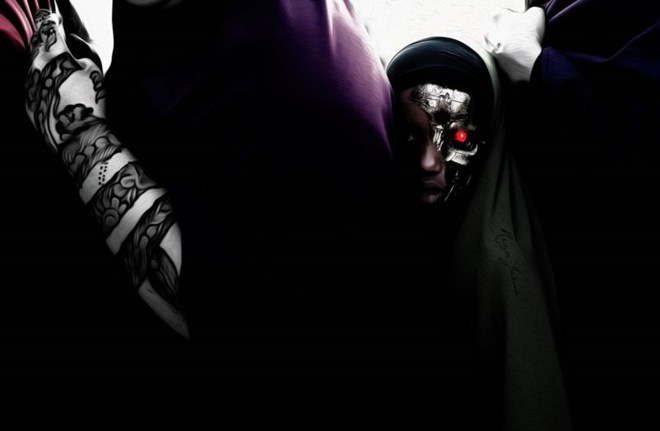 In Western media, Jama is used to seeing the hijab presented in an oppressive way. “I wanted this exhibit to represent an affirmation for when I was younger, when I was starving for representation because everywhere I looked—even in sci-fi—no one looked like me.” 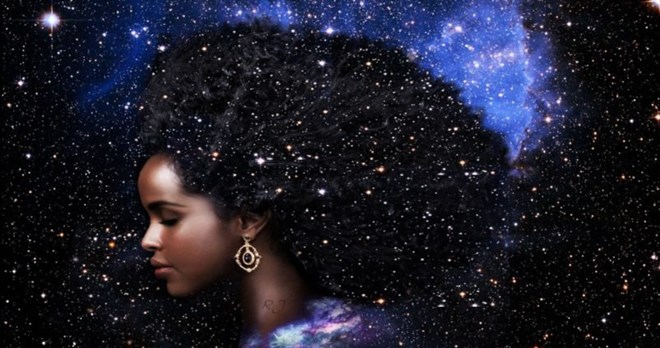 In Hoyoo Universe, Jama wanted to recreate the birth of the galaxy. “There’s something poetic about making a Black woman the mother of the universe,” she says. 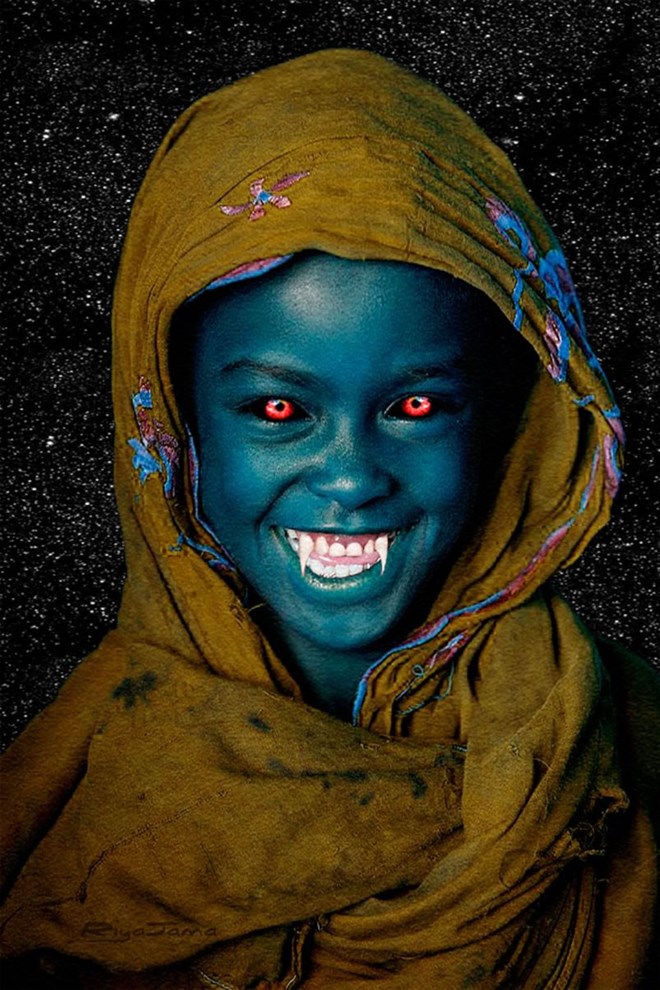 This piece represents Jama’s attempt to understand herself as an individual. In Somalia, the majority of the population is Muslim. As a non-hijabi, Jama says her Muslim identity is often overlooked within the black community, while her black identity is overlooked by other Muslims. She says she’s in a “limbo of intersection.” 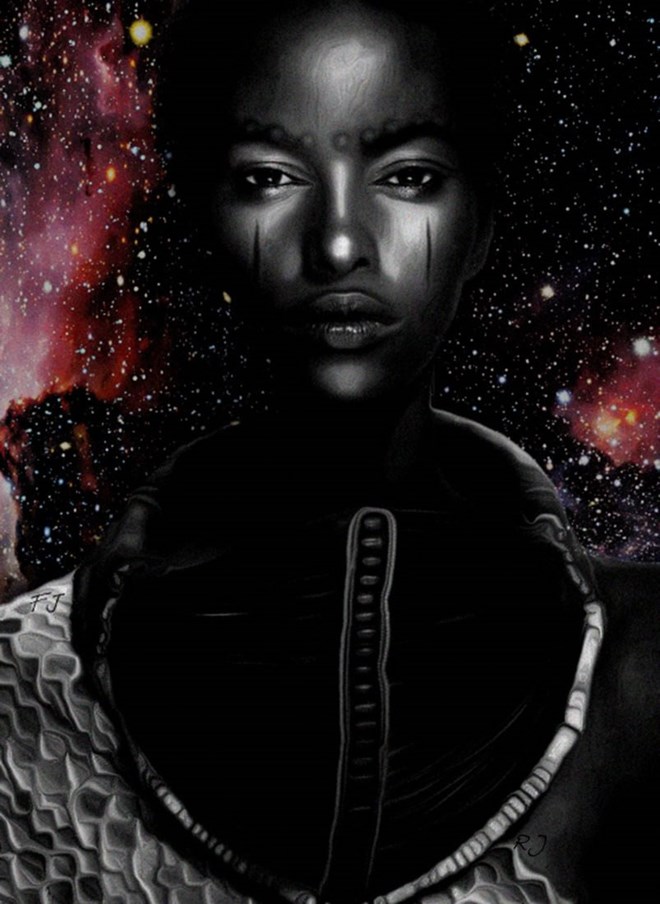 To reflect the vividness of her dreams, she wanted each image to look natural while also being otherworldly. “I’m obsessed with making art surreal, but also real,” Jama says.